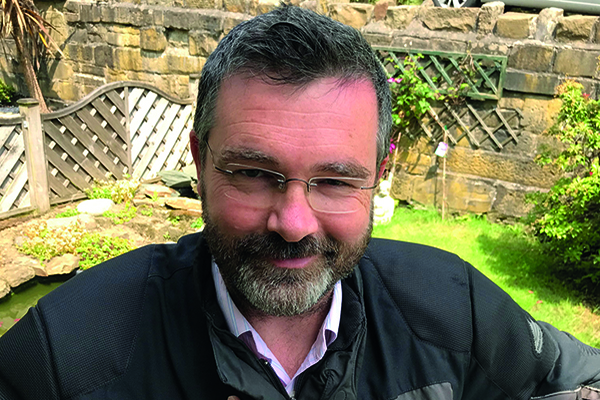 The vascular specialist podiatrist tells us about his motivation behind treating people with peripheral arterial disease.

My route to becoming a podiatrist started when I read the Ladybird book Your Body at the age of eight and found it fascinating. I was then inspired by the physiology of the heart in A-level biology. Later on, I fancied leaving my small Yorkshire village and living in a big northern metropolis, and ended up hurriedly interviewing to study podiatry at the University of Salford. I wanted to work in the NHS, had a notion that specialism was my thing and thought that Leonardo da Vinci was right about the human foot being a masterpiece of engineering and a work of art... which I forgot to mention in my interview. They still let me in!

I made peripheral arterial disease (PAD) my specialism because in podiatry PAD conjures up fear and images of unsolvable pain, wounds, amputation and early death. It’s not taught well; we are not trained well. Why do most of us leave university able to sharp debride and inject people, but not able to check femoral pulses (simple), or use a Doppler or sphyg and cuffs confidently (fairly simple)? Vascular diagnostic assessment is still the Achilles heel of many in our podiatry profession and yet it is one of the foundation skills that enables us to be safe and proactive practitioners.

PAD simply has no other healthcare champions in most areas of the UK, apart from vascular surgeons and vascular nurses. Yet we have a unique lower limb knowledge and skill set.

After a wide-ranging clinical career, I could see it was the one area of high-risk lower limb management that podiatrists and others were collectively failing at tackling. With inspiration and encouragement from a few pioneering podiatry colleagues (such as Neil Baker, Louise Stuart, Lee Hawksworth, Pam Smith) and a friendly tissue viability nurse and vascular surgeon, I eventually decided to dive in deep, focus on PAD, and try and tackle it much better. Then my mum got diagnosed with it – late – suffered with it, experienced a poor healthcare journey living with it, and sadly died far too early, from associated cardiovascular complications. That sealed my commitment and my long-term career direction.

The podiatry issues people with PAD suffer from are many. A lack of assessment and diagnosis of PAD or identification of severity can too often result in suboptimal treatment of traditional foot problems. We fear causing or triggering associated pain, non-healing wounds, amputation and early death. Or we don’t realise the harm that we can cause with podiatry treatments, in the presence of undiagnosed severe or critical PAD, until there is an adverse associated outcome, such as an amputation.

Our clinical service identifies and manages people with PAD in Manchester. We take a leading responsibility for it across north Manchester, in partnership with GPs, and podiatry and hospital vascular teams. We play a public health role in raising awareness with clinical colleagues and our public. We offer easy-access, close-to-home, gold-standard, clinical diagnostic assessments, using NICE and international best practice guidelines. We triage most people to cardiovascular management and a few to surgical opinion. We discuss the diagnosis, its implications for life and limb, and listen actively to our patients, to help us choose effective life- and limb-protecting treatments.

Some of my proudest achievements have been:

To be an effective PAD champion, you must practise the vascular aspects of podiatry at the top of your game; PAD needs to be a core inclusive role of all podiatrists who see adults aged 40-plus. To develop a leading role in PAD, you need patience, persistence and passion, along with honing your classic ‘three-Ps’ approach to clinical PAD assessment: pulses, phases and pressures.

I don’t want PAD to be perceived as a niche or specialist area of podiatry. We all palpate foot pulses, we are all PAD champions, potentially.

We need to create defined vascular podiatrist roles in every podiatry service and team, driven by clinical leads. By giving existing podiatrists responsibility and support, I believe it will become as normal as, for example, musculoskeletal, nail surgery or wound care is in all our podiatry clinics and services.

Some mistakes healthcare providers are still making when it comes to PAD and podiatry are:

Compared to the current status quo around PAD provision in most NHS organisations, vascular podiatry collaborations and integrated service redesign would save money, lives, limbs and unnecessary hospital referrals for non-severe PAD. Using the potential of a podiatry workforce already in place with all the clinical skills needed, by scaling up the few existing successful NICE best practice service models, is an absolute no-brainer.

There haven’t been enough improvements in the development of vascular podiatry, but we have taken the first steps to change this. We have three commissioned vascular podiatry services in Greater Manchester and a service collaboration between vascular and podiatric surgeons. We have given skills-training placements and workshops to podiatrists from Scotland, London and Hong Kong, as well as lecturers and students in universities.

This along with publishing articles and book chapters, creating collaborations with key vascular partners, lobbying at all-party parliamentary groups in the Houses of Parliament, developing CPD packages for our Royal Colleges and having interest from many branches and hundreds of individual podiatrists.

On the horizon, I see my entire profession upskilling, losing our fear of PAD and facing it proactively and head on. I hope people with PAD are then diagnosed by podiatrists early, treated effectively and supported to understand, tackle and survive this disease. This must be strengthened by trusting and sustainable podiatry vascular team–GP collaborations, with accessible basic diagnostics (Doppler, ABPI [ankle brachial pressure index] and toe pressure kits). Plus interpretation skills in all lower limb clinics and equality of access to cardiovascular rehabilitation services for all people with arterial disease, whether in the coronary or femoral arteries.

If we understand and communicate to most people with PAD that they need treatment involving cardiovascular risk-reducing support, lifelong medicines and effective exercise therapy – and then actively support patient choice in these areas – it will deliver a huge paradigm shift in PAD diagnosis, management and outcomes.

The best aspect of my work is seeing the ‘light bulb go on’ with podiatrists and nurses when they realise the key role they can play in the fight against this ‘Voldemort of the lower limb’. As well as the patient consultations where they come in scared or confused and leave the room understanding better the disease they have, feeling a little more empowered or determined to take it on, with the support and treatments available.

The experience and the memory of my mum and all the mums and dads, grandparents and more who I see in my clinics motivate me. My family and the many key colleagues I meet or get supportive messages from also drive me on this epic vascular podiatry journey, which I feel we podiatrists have only really just begun.

When I see or hear of other podiatrists taking responsibility for PAD and pushing changes in their own area of influence as clinicians, managers, educators and researchers, it fills me with hope and pride. We can do this, and there are exciting times ahead. What could you do differently with PAD? Join us, in a small or large way, whatever your role is in podiatry. Saving lives and limbs. It’s not just a soundbite. What an achievement, eh?